Warm weather tends to bring with it tragedy on the water. And a Canadian search and rescue team is experiencing that firsthand, relying on equipment like the VideoRay Pro 5 to assist with drowning recoveries.

In June alone, members of Hutterian Emergency Aquatic Response Team, or HEART, were involved in three incidents involving drowning victims. The squad used the Pro 5 to help recover a 42-year-old man who fell off a boat on Lake Winnipeg in Manitoba in mid-June, and were called on to help find a 17-year-old girl in St. Mary's River in Alberta around the same time. The third incident occurred a few days later, when the team traveled to Makwa Lake in Northern Saskatchewan in search of a 6-year-old drowning victim.

The squad received a request for assistance from a family member of the drowning victim at Lake Winnipeg. He was among five people who were fishing on a boat when the vessel took on water and capsized, according to police.Three men were rescued and taken to the hospital, while a fourth fisherman was recovered from the water and pronounced dead on the scene. Searchers, however, had difficulty locating the victim's 42-year-old son, prompting them to call in HEART five days after the accident occurred.

Manuel Maendel, one of HEART's team leaders, said that when they arrived on the scene, the team deployed side scan sonar first but had to stop their search because of a storm. They returned the following day and used the sonar and Pro 5 to locate and help recover the victim's body.

Just prior to the Manitoba accident, the team responded to Alberta to search for one of three teenage girls who were canoeing when their vessel capsized as they were heading toward shore. Extremely strong currents, however, prevented them from deploying any equipment. The victim's body was later recovered approximately 20 miles downstream from the accident.

When the squad was dispatched to Makwa Lake to search for the 6-year-old boy, they discovered that the Grandmother's Bay recovery team, a search-and-rescue unit which owns a VideoRay Pro 4, was also on site along with other searchers.

"We were both on the lake running side by side with our ROVs for four days," noted Maendel. Despite their extensive search, the teams and other responders were unsuccessful in locating the victim.

In addition to the incidents over the past month, HEART has had numerous other calls for assistance since acquiring the VideoRay submersible.
"The Lake Winnipeg recovery was our fourth with the Pro 5 since obtaining it last year," Maendel said. "It's doing exactly what we expected it to do." 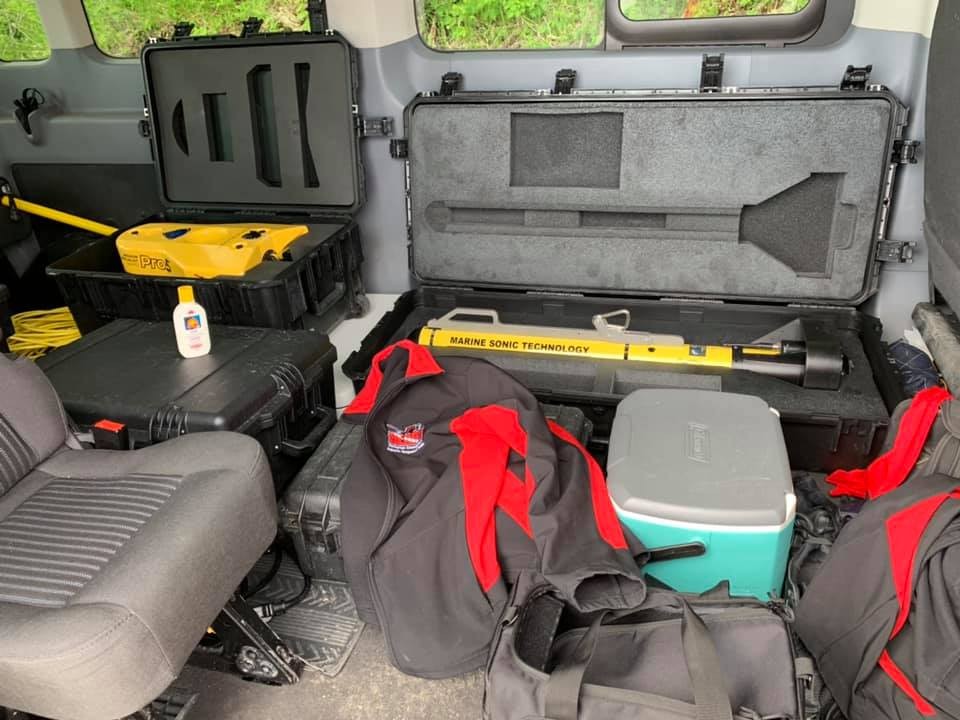 A VideoRay Pro 5 sits with other equipment in a police boat after being used to help recover a drowning victim at Lake Winnipeg in Manitoba, Canada.

Manuel Maendel, fourth from left, a member of HEART, joins family members and friends during a memorial service for the father and son who drowned while fishing on Lake Winnipeg in Manitoba, Canada.
South Korean Shipyard Takes Delivery Of New Pro 4
The New VideoRay Training Library Is Now Open